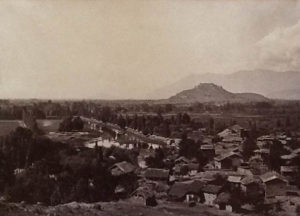 Bourne noted: “The first three days after my arrival at Srinugger were spent in “wanderings in search of the picturesque;” and, if my readers will accompany me in these peregrinations, they will see most of the beauties of this “terrestrial paradise.” Finding the visitors’ “bungalows” all full I pitched my tent on the left hand of the river under the shade of some mulberry trees. It was the 3rd of July and as fine a morning as ever dawned on earth, when I awoke after a sound night’s sleep, in the highest possible spirits to set forth on my mission of pleasure.” Bourne, S, Narrative of a Photographic Trip to Kashmir (Cashmere) and the Adjacent Districts, The British Journal of Photography, 4 January 1867, p.4