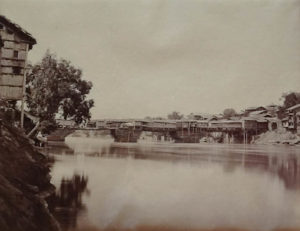 Bourne noted: “The first three days after my arrival at Srinugger were spent in “wanderings in search of the picturesque;” and, if my readers will accompany me in these peregrinations, they will see most of the beauties of this “terrestrial paradise.” Finding the visitors’ “bungalows” all full I pitched my tent on the left hand of the river under the shade of some mulberry trees. It was the 3rd of July and as fine a morning as ever dawned on earth, when I awoke after a sound night’s sleep, in the highest possible spirits to set forth on my mission of pleasure.” .

He continues:  “I stepped into my boat and gave orders to be rowed to the “dhul” or lake, distant about three miles. Passing down the river in the cool shade of the lofty poplars, we soon come to the first of the seven bridges of Srinugger. These bridges are very curios in construction and picturesque in appearance. They are built on large wooden piles of deodar logs crossed and pinned together, and, though looking anything but substantial, seem to have stood for many generations. Some of them have a row of shops flanking the roadway on each side, resembling Old London Bridge, if we may believe the prints we have seen of it.” Bourne, S, Narrative of a Photographic Trip to Kashmir (Cashmere) and the Adjacent Districts, The British Journal of Photography, 4 January 1867, p.4