Jhula Bridge across the Spiti River, between Dunkar and Mani. c1866 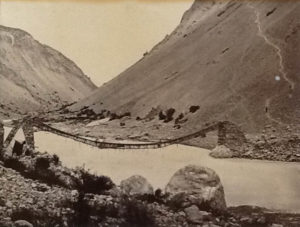 $600
Jhula Bridge across the Spiti River, between Dunkar and Mani. c1866

Bourne noted his experience of attempting to walk across the Jhula Bridge: A “most villainous bridge, made as usual of twisted twigs, and in such bad order that, near the centre, four feet of it was broken away. I had to scramble over as best I could, experiencing all the time the not very agreeable sensation that I, bridge, and all were being carried down the stream at a furious pace…After getting safely over I could afford to survey it calmly, and took a picture of it with the greatest composure”.