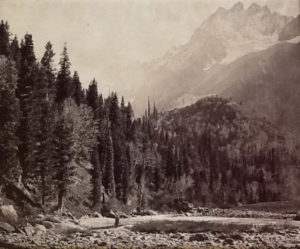 Bourne noted: …I was anxious to explore the Scind valley, a tributary of the main valley of Kashmir running far up into the mountains towards Ladak – a little river sparkling through it from the snows above. And well was my perseverance rewarded, for up this valley I saw some of the finest mountain scenery it has ever been my fortune to look upon. As I should have to return the same way, I decided to push on as fast as possible to the head of the valley, or as far as I could get, keeping a sharp look-out for pictures, which I should thus be better to take on my return. The distance was over fifty miles, which I accomplished in three days. On the first two marches I saw nothing very striking and began to fear that my toilsome journey would fear a bad “spec.,” but still had hopes, as I saw the valley narrowing, the mountains before me closing in, and the snow peeping out on some of their loftier peaks, that I should come to something better presently; and I was not deceived.” Bourne, S, Narrative of a Photographic Trip to Kashmir (Cashmere) and the Adjacent Districts, The British Journal of Photography, 23 January 1867, p.39