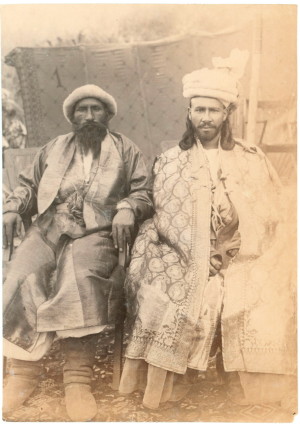 Description: Nazim Thum of Hunza (Sir Muhammad Nazim Khan was Mir from 1892 – 1938). Northwest Frontier India. C1890. Colonel Algernon Durand wrote about this campaign in his book ‘The Making of a Frontier. Five years experiences and adventures in Gilgit, Hunza, Nagar, Chitral, and the Eastern Hindu-Kush.’ published in 1899 when he was Military Secretary to the Viceroy of India, a post he held from 1894. Prior to that he was the British Political Agent in Gilgit from 1889 – 1894.