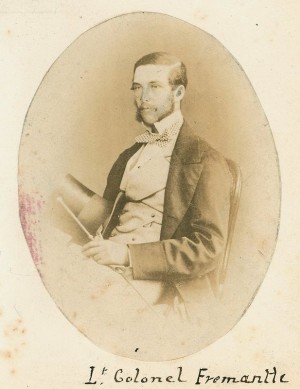 Description: Lt. Colonel Arthur James Lyon Fremantle, c1860. British Military officer In 1860, Fremantle was appointed to the position of Assistant Military Secretary at Gibraltar under Governor William John Codrington. In January 1862, the Confederate commerce raider CSS Sumter, pursued by the Union Navy, arrived in port. The ship’s commander, Raphael Semmes, sought to have his ship repaired and refitted, although ultimately the Sumter was sold and its crew transferred to the newly-constructed CSS Alabama. Sometime in early 1862, the young British lieutenant colonel met the flamboyant Confederate captain, and was inspired by Semmes’ tales of blockade running and combat on the high seas. Like many other officers of his generation, Fremantle had a considerable interest in the American Civil War. Unlike most of the others, however, he decided to take a tour of the South, and applied for a leave of absence in 1863. On 2 March 1863, Lieutenant Colonel Fremantle left England on board the mail steamer, Atrato. Lt. Colonel Fremantle toured the South and met with many of the Confederate Generals and witnessed the the Battle of Gettysburg.