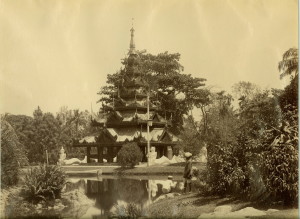 Description: Eden Gardens, situated at the northern end of the Maidan, in Calcutta, was named after Emily and Fanny Eden, the sisters of Lord Auckland, Governor-General from 1836-1842. The sisters tended the garden when it formed part of the Viceroy’s estate and later it became a famous public garden, opened in 1840. Eden Gardens contains a Pagoda, brought from Prome in Burma after the Second Burmese War and erected in 1856, by Lord Dalhousie, then the Governor-General.